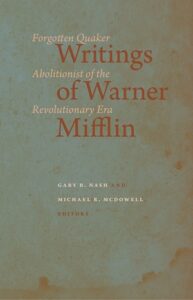 In The Writings of Warner Mifflin, Gary Nash and Michael McDowell present the correspondence, petitions, and memorials to state and federal legislative bodies, semi-autobiographical essays, and other materials of the key figure in the U.S. abolitionist movement between the end of the American Revolution and the Jefferson presidency. Mifflin was a conscience-bound pacifist Quaker who became instrumental in making Kent County, Delaware, a bastion of free blacks liberated from slavery and a seedbed of a reparationist doctrine that insisted that masters, following Biblical injunction, owed “restitution” to manumitted Africans and their descendants. His writings show how he became the most skilled lobbyist of the antislavery campaigners who haunted the legislative chambers of North Carolina, Virginia, Maryland, Delaware, and Pennsylvania, as well as the halls of the Continental Congress and the First and Second Federal congresses. The volume begins with Miffin’s deeds of manumission for his twenty-seven slaves, just before the Minutemen took on the British redcoats at Lexington and Concord Bridge; it ends with Mifflin’s letter to President John Adams calling on him to speak out against the sins of slaveholding and slave trading.

Gary B. Nash is Professor of History Emeritus and Director Emeritus of the National Center for History in the Schools at the University of California, Los Angeles, where he has taught since 1966. He was co-director of the National History Standards Project in United States and World History and editor of the standards first published in 1994 with a revised edition in 1996. Nash served as President of the Organization of American Historians in 1994-95 and is an elected member of the American Philosophical Society, the American Academy of Arts and Sciences, the American Antiquarian Society, and the Society of American Historians. He was a member of the National Park Service Second Century Commission, which published its report to the U.S. President and Congress in 2010. He also coauthored Imperiled Promise: The State of History in the National Park Service (2012). He has published many books and essays in his fields of Early American History, African American History, and Native American History. Among them are Quakers and Politics: Pennsylvania, 1681-1726 (1968); Red, White, and Black: The Peoples of Early America, also published in Spanish, 7 editions (1974, 1982, 1992, 2000, 2006, 2010, 2015); The Urban Crucible: Social Change, Political Consciousness and the Origins of the American Revolution (1979); Forging Freedom: The Formation of Philadelphia’s Black Community, 1720-1840 (1989); Race and Revolutions (1993); Freedom by Degrees: Emancipation and Its Aftermath in Pennsylvania, 1690-1840, co-author (1994); History on Trial: Culture Wars, and the Teaching of the Past, co-author (1998); Forbidden Love: The Hidden History of Mixed-Race America (1999; revised ed., 2010); First City: Philadelphia and the Forging of Historical Memory (2002); African American Lives: The Struggle for Freedom, with Clay Carson and Emma Lapsansky (2005); The Unknown American Revolution: The Unruly Birth of Democracy and the Struggle to Create America (2005); The Forgotten Fifth: African Americans in the Age of Revolution (2006); Friends of Liberty: Three Patriots, Two Revolutions, and a Tragic Betrayal in the New Nation: Thomas Jefferson, Tadeuz Kosciuszko, and Agrippa Hull, with Graham Hodges (2008); The Liberty Bell (2010); Revolutionary Founders, coedited with Alfred Young and Ray Raphael (2012); and Warner Mifflin: Unflinching Quaker Abolitionist (2017).

Michael R. McDowell, for more than fifteen years, has researched eighteenth-century Delaware Quaker Warner Mifflin’s antislavery activism using primary documents, including Mifflin’s extensive correspondence. McDowell is a member of the board of the historic Hale-Byrnes House in Delaware and has published articles on Mifflin and an early Delaware Quaker antislavery petition in Delaware publications. He has also given presentations on Warner Mifflin’s antislavery activism at Camden Delaware Friends Meeting (2005), Newark Delaware Friends Meeting (2015), and as a part of a 2013 symposium in Wilmington, “Let This Voice be Heard: 18th Century Abolitionists.” McDowell also presented “Laying the Track for the Underground Railroad: Warner Mifflin’s Eighteenth-Century Antislavery Legacy in the Delmarva Peninsula” at the 2016 Harriet Tubman Underground Railroad Conference.

Reviews of 'Writings of Warner Mifflin: Forgotten Quaker Abolitionist of the Revolutionary Era'

“
Writings of Warner Mifflin is an important collection of correspondence, essays, legislative memorials, court petitions, and legal documents, all but a handful written by the eighteenth-century Quaker abolitionist who transformed antislavery sentiment into antislavery action. In their focus on accuracy and readability, the editors have rendered Mifflin accessible to the specialist and non-specialist alike. This collection is a significant contribution to the history of the antislavery movement and Quakerism.
”
- Julie Holcomb, editor of Quaker History and author of Moral Commerce: Quakers and the Transatlantic Boycott of the Slave Labor Economy (Cornell, 2016)
Library, Museums and Press
181 South College Avenue, Newark, DE 19717-5267