University of Delaware Press
by Kendall B. Tarte 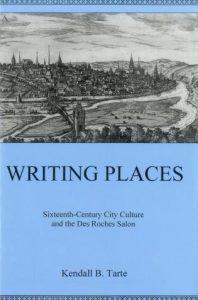 This book examines the literary and cultural production of the provincial capital of Poitiers from the late 1560s through the early 1580s. During that time the city withstood a Protestant siege, hosted the French court, welcomed Parisian jurists for special court sessions, and fostered the writers of one of the first humanist salons. This study of the literary city focuses on the circle of writers and jurists who gathered around the mother and daughter pair Madeleine and Catherine Des Roches. It also considers influences on the salon and the city such as contemporary codes of conduct, the court sessions, and the religious wars. Local events and places inspired writers of poetry and prose, history and geography. This book explores the “writing places”—both the places that writers depict and the places that cultivate and influence them—of late sixteenth-century Poitiers.

About the Author
Kendall B. Tarte is Associate Professor of French at Wake Forest University.