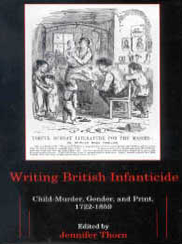 Writing British Infanticide tracks the ways that the circulation of narratives of child-murder in eighteenth- and nineteenth-century Britain shaped perceptions and punishments of the crime and, more elusively, hierarchies of class and gender. The essays brought together in this volume pose the question: How are we to understand the proliferation of writing about child-murder in eighteenth- and nineteenth-century Britain, the overlap of an expanding print culture with the widely evident narration of this particular crime? Further, what are we to make of the recurrent and remarkably consistent representation of child-murder as the special province of unmarried, desperate women? Focusing on specific instances of the transformative effect of the circulation of narratives of child-murder, Writing British Infanticide takes as its purview not child-murder per se but the ways that writing about it credentialed and differentiated writers in different, but often overlapping, genres and moments in a key period in the expansion of print.

About the Editor
Jennifer Thorn is an Assistant Professor of English at Duke University.