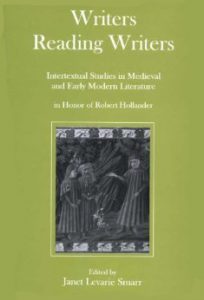 This volume is a collection of intertextual studies on medieval and early modern literature in honor of Robert Hollander by some of his former students. Robert Hollander taught how writers are always also readers, responding to texts that have provoked their thought. The contributors to this volume have all been working within its overarching theme: writers reading and responding to other writers. As Hollander’s work has focused especially on Dante and Boccaccio, many of the essays treat one of these writers, either as reading or as read by others. Some essays trace intertextual influences in Langland, Shakespeare, or post-Enlightenment writers faced with the loss of Dante’s meaningful cosmos. All the essays demonstrate the importance of such readings to the later writer’s conception and formulation of his own work.

About the Editor
Janet Levarie Smarr is a Professor in the Theatre Department and Italian Studies Program at the University of California in San Diego.