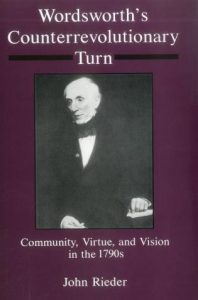 This book engages a controversy over the relationship between Wordsworth’s poetry and his politics, dating back to the early reviews of the Lyrical Ballads. Rieder argues that Wordsworth’s poetry achieves its power by projecting a fantasy of community that finds its material counterpart far more in the literature itself than in the rural occupations or natural scenes Wordsworth depicts. Also argued throughout is that Wordsworth’s originality springs from his invention and elaboration of a peculiarly literary form of community.