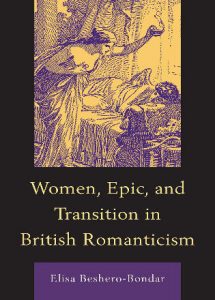 Women, Epic, and Transition in British Romanticism argues that early nineteenth-century women poets contributed some of the most daring work in modernizing the epic genre. The book examines several long poems to provide perspective on women poets working with and against men in related efforts, contributing together to a Romantic movement of large-scale genre revision. Women poets challenged longstanding categorical approaches to gender and nation in the epic tradition, and they raised politically charged questions about women’s importance in moments of historical crisis.

While Romantic epics did not all engage in radical questioning or undermining of authority, this study calls attention to some of the more provocative poems in their approach to gender, culture, and history. This study prioritizes long poems written by and about women during the Romantic era, and does so in context with influential epics by male contemporaries. The book takes its cue from a dramatic increase in the publication of epics in the early nineteenth-century. At their most innovative, Romantic epics provoked questions about the construction of ideological meaning and historical memory, and they centralized women’s experiences in entirely new ways to reflect on defeat, loss, and inevitable transition. For the first time the epic became an attractive genre for ambitious women poets.

The book offers a timely response to recent groundbreaking scholarship on nineteenth-century epic by Herbert Tucker and Simon Dentith, and should be of interest to Romanticists and scholars of 18th- and 19th-century literature and history, gender and genre, and women’s studies.

About the Author
Elisa Beshero-Bondar is associate professor of English literature at the University of Pittsburgh at Greensburg.

Reviews of 'Women, Epic, and Transition in British Romanticism'

“
Elisa Beshero-Bandar offers readers new ways of understanding epic, gothic, and Romantic representations of female experience. […] These chapters provide thoughtful, sustained close readings of the primary texts while situating them within important historical contexts, such as the emergence of Revolutionary idealism, the rise of British imperialism, and the political effects of the Napoleonic Wars.
”
- XVIII New Perspectives on the Eighteenth Century
Library, Museums and Press
181 South College Avenue, Newark, DE 19717-5267