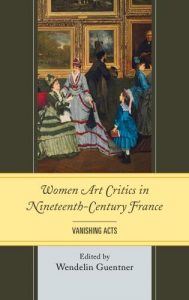 Over the past years, studies have begun not only to identify the factors that impeded the full participation of women artists in French cultural life, such as women’s limited access to professional art education, but also to bring to light the considerable artistic accomplishments of women occluded by historians for over a century. A similar effort at historical revision has been under way for French women writers. Works of fiction that enjoyed many editions in the nineteenth-century receded from our field of vision for almost a century before being rediscovered and reissued during the last decades of the twentieth century. Such efforts have resulted in scholarship that has helped revise the history of both artistic and literary expression in nineteenth-century France.

Similarly, many women in nineteenth-century France had their art criticism published both in journal reviews and in book form, often for decades, in a number of the most influential venues of their day. However, it is perplexing that they remain almost totally invisible in histories of French culture. Women Art Critics in Nineteenth-Century France: Vanishing Acts is the first sustained effort to bring these prolific and influential critics out from the shadows. Although each of the chapters in this volume results from an interdisciplinary approach, the fact that they are written by scholars in art history and in literature means that there will be inevitable differences in approach and methodology. Thus, we study the women’s reception of specific artworks and aesthetic movements, discuss intersections of aesthetics and politics in their essays and the literary styles and rhetorical strategies of individual critics, explore the social conditions that allowed or impeded their successes, and suggest reasons for their all but disappearance in the twentieth century. In bringing to light for twenty-first-century readers the “vanished” writings of heretofore unrecognized or under recognized women art critics, the authors hope to contribute to the ongoing revision of women’s role in cultural history. The multifaceted approaches to word/image studies modeled in this book, and the many avenues for further research it identifies, will inspire scholars in a number of disciplines to continue the work of reinscribing women in the history of cultural life.

About the Editor
Wendelin Guentner is professor of French literature and culture at the University of Iowa.