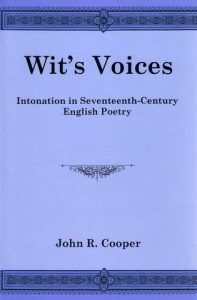 This work shows how seventeenth-century English lyric poets were able to control the way that their poetry sounds when read aloud, and thus to influence emotional force and meaning. It begins by addressing the criticizing contemporary treatments of meter. It then gives a theoretical and descriptive account, based on Dwight Bolinger’s analysis of English intonation, of how and why iambic pentameter uniquely permits a poet to achieve both a regular rhythm and an expressive variety in intonation. The rest of the book consists of close readings of poems by Surrey, Sidney, Donne, Jonson, Herbert, and others to show each poet controlling intonation to achieve his own voice and thus his relationship with an implied listener. The work concludes by discussing the changing cultural context at the end of the century in which witty, intimate utterances yielded to the more public voice of Dryden, Pope, and the Augustan heroic couplet.