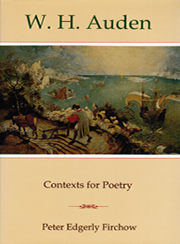 This volume is an attempt to consolidate the critical findings of the last quarter century, and then take them a further step in the direction of seeing how some of Auden’s most important poems can be better understood against the background of his own intellectual development and the often troubled history of his time. The book is at least as much an attempt to show how a certain type of critical methodology, which combines intellectual and social history, biography and textual analysis, helps to illuminate poems (or parts of poems) that have hitherto remained imperfectly understood.