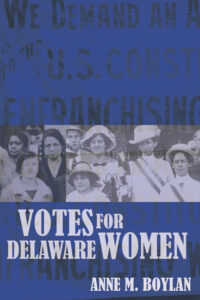 Votes for Delaware Women is the first book-length study of the woman suffrage struggle in Delaware, placing it within the rich historical scholarship on the national story. It looks especially at why, despite decades of suffrage organizing and an epic struggle in Dover, in the spring of 1920, the legislature refused to make Delaware the final state to ratify the Nineteenth Amendment. Delaware was unusual as a border state that was segregated but did not disfranchise African Americans. The book traces how, starting in the 1890s, both white and African American women organized and advocated for “votes for women,” first by revising the state constitution and then through a federal amendment, and explores what suffrage meant to each group. Within the state’s two major suffrage organizations, the Delaware Equal Suffrage Association (DESA), an affiliate of the National American Woman Suffrage Association (NAWSA), and the Delaware branch of the National Woman’s Party (NWP), divisions over strategy and tactics widened into fissures, especially during the Great War, making it difficult to combine in a common endeavor. As in other states, anti-suffrage forces regularly raised the specter of Black women voting in order to discredit the campaign for the vote. Delaware’s African American suffragists were vocal in their responses to anti-suffragists’ claims, while also participating in occasional outreach across the color line to white suffrage allies. In the end, the book argues, a combination of racial and class issues, particularly political leaders’ worries about how African American women might vote, partisan bitterness, concerns over taxation and schooling in a segregated state, and legislative gerrymandering, doomed the ratification effort.

Anne M. Boylan is Professor Emerita of History and Women and Gender Studies at the University of Delaware. A social historian of the United States, she researches and writes on women’s history, social and cultural history, voluntary associations, and religion. She is the author of numerous scholarly articles and four books: Sunday School: The Formation of An American Institution, 1790-1880 (Yale, 1988); The Origins of Women’s Activism: New York and Boston, 1797-1840 (UNC, 2002); Women’s Rights in the United States: A History in Documents (Oxford, 2016); and Votes for Delaware Women (Delaware, 2021). Boylan has been the recipient of fellowships and grants from, among others, the National Endowment for the Humanities and the Radcliffe Institute at Harvard University, and has been inducted into the Society of American Historians. She served as state coordinator for the entries for Delaware suffragists included in the online Biographical Dictionary of the Woman Suffrage Movement in the United States.