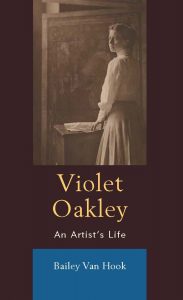 Violet Oakley: An Artist’s Life is the first full-length biography of Violet Oakley (1874–1961), the only major female artist of the beaux-arts mural movement in the United States. While not a “sensational page turner,” there is much of human interest here — a pampered and spoiled young woman who suddenly finds herself in greatly reduced circumstances, forced by necessity to make a living in illustration and support her parents; a sensitive and idealistic young woman who, in a desperate attempt to save her neurasthenic father, is driven to embrace Christian Science, a religion derided by her family and friends; a 28 year old woman who receives one of the plum commissions of the era, a mural cycle in the Pennsylvania State Capitol, in a field dominated by much older and predominantly male artists; a woman in her forties who although professionally successful finds herself very much alone and who ‘falls’ for her student, Edith Emerson; a friend of artists like dancer Ruth St. Denis and violinist Albert Spalding who nevertheless was supremely conscious of social mores, the “Miss Oakley” of the Social Register who preferred the company of upper class to bohemian society; the tireless self-promoter who traveled abroad to become the unofficial visual historian of the League of Nations yet who ironically was increasingly regarded as a local artist.

About the Author
Bailey Van Hook is professor of art history and co-director of the MA program in material culture and public humanities at Virginia Polytechnic Institute and State University.