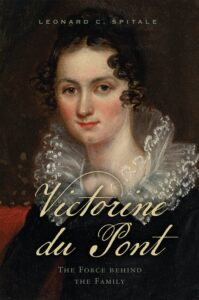 Victorine Elizabeth du Pont, the first child of Eleuthère Irénée du Pont and his wife Sophie, was seven years old when her family emigrated to America, where her father established the humble beginnings of what would become a corporate giant. Through correspondence with friends and relatives from the ages of eight to sixty-eight, Victorine unwittingly chronicled the first sixty years of the du Pont saga in America. As she recovered from personal tragedy, she became first tutor of her siblings and relations. This biography makes the case that Victorine has had the broadest—and most enduring—influence within the entire du Pont family of any family member. The intellectual heir of her venerable grandfather, Pierre Samuel du Pont de Nemours, although Victorine grew up in an age where women’s opportunities were limited, her pioneering efforts in education, medicine, and religion transformed an entire millworkers’ community.