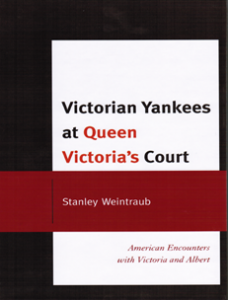 Little seems to have changed since Queen Victoria’s day in the instant magnetism of British royalty across the Atlantic Ocean; yet for the first generations liberated by revolution, the British Isles and its sovereigns seemed as remote as the moon. In the young nation, Americans who were little interested in the sons and daughters of their last king, George III, developed a love-hate relationship with Victoria, his granddaughter, that lasted for all her sixty-four years on the throne, ending only with her death in the first weeks of the twentieth century. Victoria’s long reign encompassed much of the time in which the young United States was growing up. The responses of Americans toward Victoria reveal not only what they thought of her (and her husband) as people and as monarchs, but reflect their own ambitions, confidence, smugness, insecurities—and sense of loss.

Parting from England brought a surge of pride, but it also carried with it an unanticipated price. American encounters with Queen Victoria as person and as symbol evoke the costs of relinquishing a history, a tradition, a ceremonial texture. The brash, bewildered and beguiled Americans in these pages, from lion tamer Isaac Van Amburgh, Barnum’s midget “Tom Thumb” and sharpshooter Annie Oakley, to literary lions like Nathaniel Hawthorne, Mark Twain and Henry James evince not only another dimension of the remote woman who might have been their queen, but what Americans were like, and what they thought they were like, in her time.

About the Author
Stanley Weintraub is Evan Pugh Professor Emeritus of Arts and Humanities at Pennsylvania State University, adjunct professor at the University of Delaware, and honorary professor at West Chester University. He is the author of fifty-five books including biographies of Queen Victoria, Prince Albert, Edward VII, and Benjamin Disraeli.