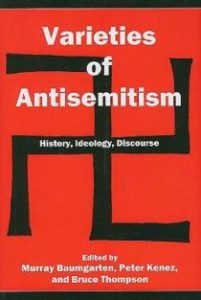 The essays in this volume articulate the historical ground on which this artistic exploration of the Holocaust and anti-Semitism depends. They also elaborate on the spectrum that connects them, in terms of their historical location and ideological emphases, and thus suggest the ways in which they are connected in terms of rhetorical discourse. The essays are governed by the sense that anti-Semitism has not been a unitary experience or event. Rather it is its varieties that are explored—exactly those aspects that have made it so difficult to grasp, and that led to the wide-ranging events and murdering methods of the Holocaust. Thus the editors eschew the causal explanation of Hitler’s Willing Executioners as they seek to provide more nuanced understanding.