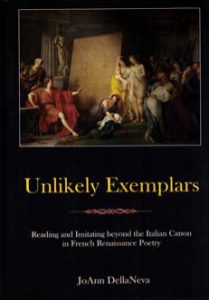 This book explores questions of reading and writing practices in the French Renaissance. While the imitation of great masters of the past, such as Petrarch, was a staple of Renaissance poetics, French poets of the mid-1500s, including Saint-Gelais, Du Bellay, Ronsard, Baïf, and Magny, often turned to a set of unlikely exemplars: the second-rate poets published in a series of volumes known as the Italian Anthologies. Part one provides a general context for this surprising practice by examining modern and Renaissance theories of minor model imitation, Italian canon formation, the publishing of phenomenon of the anthologies and other florilegia, the use of personal commonplace books, and Ronsard’s own annotated copies of these anthologies. Part two shows how these French poets applied the principle of fragmentary exemplarity in their imitations and how they used these sources to engage in a dialogue with each other that featured displays of rivalry and playfulness.

About the Author
JoAnn DellaNeva teaches at the University of Notre Dame.