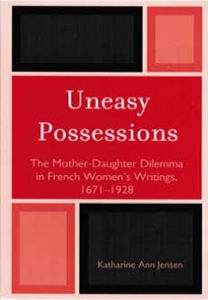 In Uneasy Possessions: The Mother-Daughter Dilemma in French Women’s Writings, 1671-1928, Katharine Ann Jensen analyzes the work of five major French women writers, discovering a four-century pattern of mother-daughter relationships marked by domination, submission, and conflict. This groundbreaking study explores work of Marie-Madeleine de Lafayette, Marie de Sévigné, Elisabeth Vigée Lebrun, George Sand, and Colette, providing a new reading of women’s history and offering a new understanding of female psychology. Jensen argues that conflict between the mothers and daughters depicted in these texts was the result of two contradictory ideologies. In order to pass proper feminine behavior on to their daughters, mothers were encouraged to construe daughters as part of themselves, even as daughters were expected to adopt their mothers’ wishes as their own. At the same time, a developing individualism created a conflict between the daughter’s desire for autonomy and her mother’s wish to be recognized for having raised a perfect daughter-alter ego.

Despite vast changes in social organization in France over the four centuries of this study, the mother-daughter ideology remained effectively the same. To keep their daughters virgins, mothers were expected to form their daughters in their own image-as a mirror reflection. Mother-daughter reflectivity extended even into the marriage bed, as daughters were taught to remain faithful and to submit to (male) authority throughout their lives. Thus, the daughter’s sexuality was channeled into producing legitimate offspring while the mother’s ambition was confined to working on her daughter, rather than focused on creating cultural works that might compete with men’s. Mothers were rewarded with the narcissistic satisfaction of viewing their filial creations as a socially sanctioned work of art: daughters thus functioned as possessions. Yet daughters remained resistant, seeking to escape their mothers’ control, while mothers feared that the daughters might develop their own desires and felt wounded by their filial possessions’ potential autonomy. Jensen explores this pattern of uneasy possession through intersubjective psychoanalytic theory, which argues that true individuality depends upon mutual recognition: a relationship in which each person acknowledges the autonomy of the other. Unable to engage in such recognition, the mothers and daughters in this study entered into an intimate battle of wills that became a lifelong struggle for domination.

This is a book that will enhance the curriculum in both women’s and gender studies courses and classes in French literature and culture. By using intersubjectivity with socio-historical research, Uneasy Possessions brings a much-needed perspective to three decades of scholarly work on one of most vital relationships in women’s lives past and present.

About the Author
Katharine Ann Jensen is associate professor of French Studies at Louisiana State University, where she also teaches in the Women’s and Gender Studies Program.