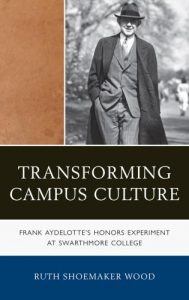 At a time in American history when football ruled the American campus and fraternities dominated student life, Frank Aydelotte, through his determination to specialize exclusively in initiating an Honors program of study, accomplished a feat virtually unknown in American higher education. That is, he succeeded in shaping one regional, run of the mill, Quaker school-Swarthmore College-into an intellectually-charged, academically-focused institution able to command national respectability, prestige, and financial support and commit itself to intellectual life at a time when higher education in the United States met with pressures against such change. Under Aydelotte’s leadership, Swarthmore was able to hold out in a period of tremendous expansion of higher education and staggering growth of intercollegiate athletics, “student activities,” and vocational education. While oxymoronic in the early 20th century to suggest to mainstream America that a college would define itself by a commitment to the life of the mind, Aydelotte did just that, indelibly shaping the culture of Swarthmore in a manner so deep-seated as to persist to the present day. The ways in which Swarthmore changed as a college under Aydelotte’s leadership shed light on how change occurs and persists in higher education and how change on a single campus can bring about wide-spread educational reform that affects a nation.

Frank Aydelotte returned from his time in England as a Rhodes Scholar fully committed to affording to America’s highest achieving college students the educational experiences that had shaped him while abroad. A complicated combination of idealism and elitism, mixed with a deep reformer’s drive to spread the Oxford gospel in America, led to his focus on pedagogy when he returned to the US. Aydelotte undertook concrete and highly strategic steps toward the long-term goal of introducing to American higher education Oxford-like methods aimed at empowering intellectually-oriented students to excel far beyond the barriers present in American education that resulted from high achievers being held back by the “pace of the average.” This mission became his personal crusade for the rest of his life and played out most vividly on the campus of tiny Swarthmore College where he served as president from 1921 to 1940.

About the Author
Ruth Shoemaker Wood is assistant dean for students at New York University.