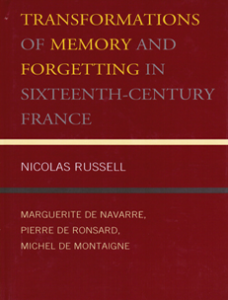 This book proposes that in a number of French Renaissance texts, produced in varying contexts and genres, we observe a shift in thinking about memory and forgetting. Focusing on a corpus of texts by Marguerite de Navarre, Pierre de Ronsard, and Michel de Montaigne, it explores several parallel transformations of and challenges to traditional discourses on the human faculty of memory.

Throughout Classical Antiquity and the Middle Ages, a number of influential authors described memory as a powerful tool used to engage important human concerns such as spirituality, knowledge, politics, and ethics. This tradition had great esteem for memory and made great efforts to cultivate it in their pedagogical programs. In the early sixteenth century, this attitude toward memory started to be widely questioned. The invention of the printing press and the early stages of the scientific revolution changed the intellectual landscape in ways that would make memory less important in intellectual endeavors. Sixteenth-century writers began to question the reliability and stability of memory. They became wary of this mental faculty, which they portrayed as stubbornly independent, mysterious, unruly, and uncontrollable–an attitude that became the norm in modern Western thought as is illustrated by the works of Descartes, Locke, Freud, Proust, Foucault, and Nora, for example.

Writing in this new intellectual landscape, Marguerite de Navarre, Ronsard, and Montaigne describe memory not as a powerful tool of the intellect but rather as an uncontrollable mental faculty that mirrored the uncertainty of human life. Their characterization of memory emerges from an engagement with a number of traditional ideas about memory. Notwithstanding the great many differences in concerns of these writers and in the nature of their texts, they react against or transform their classical and medieval models in similar ways. They focus on memory’s unruly side, the ways that memory functions independently of the will. They associate memory with the fluctuations of the body (the organic soul) rather than the stability of the mind (the intellectual soul). In their descriptions of memory, these authors both reflect and contribute to a modern understanding of and attitude towards this mental faculty.

About the Author
Nicolas Russell is a faculty fellow in French at Colby College.

“
While a number of scholars have studied memory in this period, Russell’s in-depth study of three principal sixteenth-century French authors provides a significant contribution to the field. Russell combines a variety of perspectives — psychological, historical, and theoretical — to make for a solid, learned, and engaging read.
”
- Renaissance Quarterly
Library, Museums and Press
181 South College Avenue, Newark, DE 19717-5267