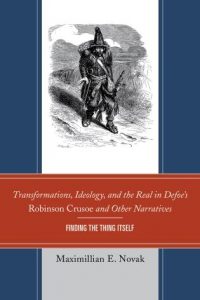 This book explores significant problems in the fiction of Daniel Defoe. Maximillian E. Novak investigates a number of elements in Defoe’s work by probing his interest in rendering of reality (what Defoe called “the Thing itself”). Novak examines Defoe’s interest in the relationship between prose fiction and painting, as well as the various ways in which Defoe’s works were read by contemporaries and by those novelists who attempted to imitate and comment upon his Life and Strange Surprizing Adventures of Robinson Crusoe decades after its publication. In this book, Novak attempts to consider the uniqueness and imaginativeness of various aspects of Defoe’s writings including his way of evoking the seeming inability of language to describe a vivid scene or moments of overwhelming emotion, his attraction to the fiction of islands and utopias, his gradual development of the concepts surrounding Crusoe’s cave, his fascination with the horrors of cannibalism, and some of the ways he attempted to defend his work and serious fiction in general. Most of all, Transformations, Ideology, and the Real in Defoe’s Robinson Crusoe and Other Narratives establishes the complexity and originality of Defoe as a writer of fiction.

About the Author
Maximillian E. Novak is distinguished research professor of English, emeritus, at the University of California, Los Angeles.