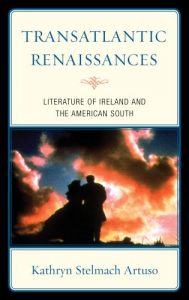 The impulses that fired the Southern Literary Renaissance echoed the impetus behind the Irish Literary Revival at the turn of the twentieth century, when Ireland sought to demonstrate its cultural equality with any European nation and disentangle itself from English-imposed stereotypes. Seeking to prove that the South was indeed the cultural equal of greater America, despite the harsh realities of political defeat, economic scarcity, and racial strife, Southern writers embarked on a career to re-imagine the American South and to re-invent literary criticism.

Transatlantic Renaissances: Literature of Ireland and the American South traces the influence of the Irish Revival upon the Southern Renaissance, exploring how the latter looked to the former for guidance, artistic innovation, and models for self-invention and regional renovation. While Deleuze and Guattari’s model for minor literature refers to minority or regional authors who work within a major language for purposes of subversion, Artuso modifies their term along generic and thematic lines to refer to errant female juveniles within subsidiary genres whose nonconformist development threatens to disrupt the dominant patriarchal culture of a region or nation. Using the themes of initiation and maturation to anchor the book, Artuso analyzes how the volatile development of young women in revivalist texts often reflects or questions larger growth pangs and patterns, including the evolution of the literary revival itself and the development of a regional minority group that must work within a dominant culture, language, and nation while seeking methods of subversion. With minor literature as the container for undervalued genres such as popular fiction and short stories—often considered an author’s juvenilia—this work investigates not only how these texts challenge the authoritative claims of the novel, but also scrutinizes the renaissance trope of female rebirth, as the revivalists often figured cultural, national, or regional regeneration through the metamorphoses or maturation of female protagonists such as Cathleen ní Houlihan, Scarlett O’Hara, and Virgie Rainey. Drawing upon New Historical, New Critical, and postcolonial approaches, Artuso examines works by Lady Gregory, Margaret Mitchell, Eudora Welty, Elizabeth Bowen, Jean Toomer, and James Joyce.

About the Author
Kathryn Stelmach Artuso is an assistant professor of English at Westmont College in Santa Barbara, California.