University of Delaware Press
by Susannah B. Mintz 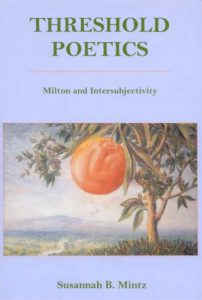 Threshold Poetics: Milton and Intersubjectivity is a study of the challenge intersubjective experience poses to doctrinal formulations of difference. Focusing on Paradise Lost and Samson Agonistes and using feminist and relational psychoanalytic theory, the project examines representations of looking, working, eating, conversing, and touching, to argue that encounters between selves in “threshold space” dismantle the binary oppositions that support categorical thinking. A key term throughout the study is recognition, defined as the capacity to tolerate both sameness and difference between separate selves. Recognition of likeness-in-difference thus undermines the exclusionary logic of patriarchal and political hierarchies. Both Eve and Dalila demonstrate the ability to respect the borders of the other while seeking out similarity, but where Paradise Lost depicts the eventual achievement of intersubjective understanding between Adam and Eve after the fall, Samson Agonistes records its failure when Samson, maintaining the boundaries of difference, refuses Dalila’s effort to make contact.

About the Author
Susannah B. Mintz is Assistant Professor of English at Skidmore College.