University of Delaware Press
by William A. Davis 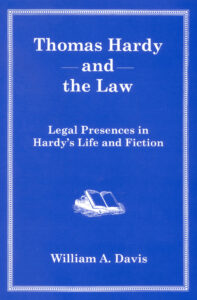 Thomas Hardy and the Law argues that Hardy’s extensive legal research and experience drove his writing of fiction throughout his career. The book studies Hardy’s legal research and friendships, his work as a Dorchester magistrate, actual Victorian law cases from which he drew novel material, nineteenth-century legal reform, the legal “machinery” of the novels, and Hardy’s position as an advocate for the reform of marriage laws. Legal-fictional issues analyzed in the book’s five chapters include civil marriage, sham marriage, rape, seduction, marital desertion, divorce, adultery and murder investigations, legal inquests, bigamous marriages, matrimonial cruelty, and wife sale. These issues are grouped into chapters that study the progress of human relationships from their beginnings to their ends. Throughout his fiction, Hardy offers a representation of life—particularly female life—as an evolving legal spectacle, one in which the law enables yet also interferes with human plans in the earlier fiction and eventually “prescribes” human life in the later works.

About the Author
William A. Davis teaches English literature, composition, and literary research at the College of Notre Dame of Maryland.