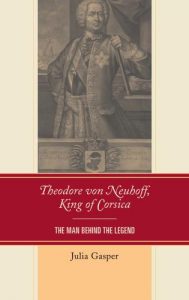 “A visionary and a madman” was how one British statesman, Lord Carteret, described Theodore von Neuhoff. This exciting biography, Theodore von Neuhoff, King of Corsica: The Man behind the Legend by Julia Gasper, traces the unlikely career of the German baron who in 1736 had himself proclaimed and crowned King of Corsica. Theodore von Neuhoff’s career spanned the entire continent and his role in the Corsican rebellion against Genoa was as bold and unconventional as everything else in his life. Mixing with royalty, rogues and rabble, he was successively a soldier, secret agent, Jacobite, speculator, alchemist, cabbalist, Rosicrucian, astrologer, fraudster, and spy. He had changed his name several times, abducted a nun and seen the inside of several prisons before turning his hand to revolution. Neuhoff had daring far-sighted ideas about religious tolerance and the abolition of slavery that turned the Corsican rebellion into a significant political event with repercussions way beyond the shores of one small island. Denounced as an arch-criminal, traitor and seditious heretic, he survived pursuit by the agents of the Genoese Republic for twenty years with a price on his head, dodging assassination attempts while meeting countless famous and fascinating people. Valuable to the British as a political tool against the French, he spent his old age in relative comfort in an English debtors’ prison. Theodore von Neuhoff, King of Corsica argues that despite all his eccentricity Neuhoff was still a significant Enlightenment figure.

About the Author
Julia Gasper, PhD has taught for the Stanford University Programme in Oxford, the University of Roehampton, Surrey and St. Bonaventure University, NY. She is an editor of the Oxford University Press edition of the Plays of Thomas Middleton and a contributor to the Oxford Dictionary of National Biography. She has given several public talks and lectures on the subject of King Theodore, notably at the Université de Corse Pascal Paoli in 2004, at ADECEC in Cervione, Corsica in 2005, and the annual BSECS conference at Oxford University in 2006. Dr. Gasper wrote this book with help from the M. Aylwin Cotton Foundation for Mediterranean Studies.