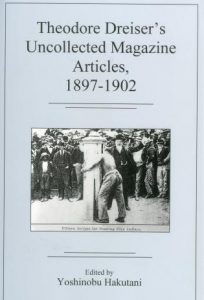 About the Editor
Yoshinobu Hakutani is Distinguished Professor of English at Kent State University.