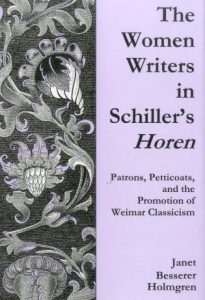 This work examines the integral role that six female authors played in Schiller’s ambitious literary journal, Die Horen (1795-97). Louise Brachmann, Friederike Brun, Amalie von Imhoff, Sophie Mereau, Elisa von der Recke, and Caroline von Wolzogen helped put the journal back on track when it floundered fiscally and programmatically and their literary contributions were among the most successful the journal ever received. Beyond a critical discussion of the women’s publications in Schiller’s journal, this work addresses the range of problems associated with women’s writing and publishing during the late eighteenth century, the aesthetics of Weimar Classicism, Schiller, and to a lesser degree, Goethe as patrons, the interpretation of literary history, and the reception of the most important organ of German Classicism.

About the Author
Janet Besserer Holmgren is a German professor at Pacific Lutheran University.