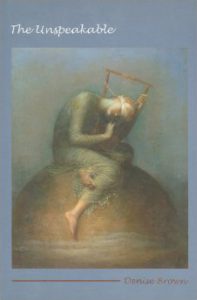 On March 6, 1998, a disgruntled employee went on a rampage at the Connecticut Lottery Corporation, killing four executives before turning the gun on himself. The tragedy made headlines across the country for weeks. In The Unspeakable, Denise Brown, who lost her husband in the shootings, gives voice to the story left untold by the media. In this passionate and haunting memoir, Brown charts the difficult path from bitterness to hope—the complicated grief that is the legacy of violence. Sobering and unsentimental, it is the work of “a courageous, honest, and deeply thoughtful writer,” said Tom Perrotta, author of Little Children. The lack of candor that surrounds our society’s love affair with violence is one element that moved Brown to write her book. “Someone should tell the truth,” she says in The Unspeakable, as she hands over important documents about the crime to an editor and reporter at an unnamed newspaper. David Kaczynski, Executive Director of New Yorkers Against the Death Penalty, says Brown’s work “should help us speak more honestly about violence and loss.”

About the Author
While not an activist, Brown writes and speaks about healing after violence; she also writes about local history, food, and family life. She lives in the Northeast Kingdom of Vermont with her three children.