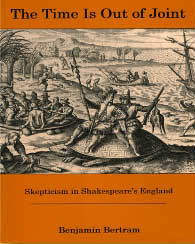 The final decades of the sixteenth century brought tumultuous change in England. Bitter disputes concerning religious reformation divided Catholics and Protestants, radical reformers and religious conservatives. The Church of England won the loyalty of many, but religious and political dissent continued. Social and economic change also created anxiety as social mobility, unemployment, riots, and rebellions exposed the weakness of an ideology of order. The Time is Out of Joint: Skepticism in Shakespeare’s England situates the work of four skeptics—Reginald Scot, Thomas Harriot, Christopher Marlowe, and William Shakespeare—within the context of religious and social change. These four writers responded to the dislocations that upset the stability of the newly formed Protestant nation by raising bold and often disturbing questions about religion and epistemology. The historical tropes covered in this book—witchcraft debates, New World discovery, economic struggle, and religious reformation—reveal the diverse contexts in which skepticism appeared and the many contributions skepticism made to a nation undergoing radical change.

About the Author
Benjamin Bertram is Associate Professor of English at the University of Southern Maine.