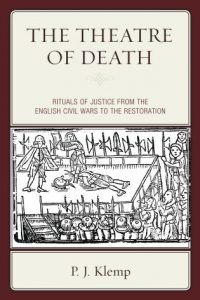 This book discusses some rituals of justice—such as public executions, printed responses to the Archbishop of Canterbury’s execution speech, and King Charles I’s treason trial—in early modern England. Focusing on the ways in which genres shape these events’ multiple voices, I analyze the rituals’ genres and the diverse perspectives from which we must understand them.

The execution ritual, like such cultural forms as plays and films, is a collaborative production that can be understood only, and only incompletely, by being alert to the presence of its many participants and their contributions. Each of these participants brings a voice to the execution ritual, whether it is the judge and jury or the victim, executioner, sheriff and other authorities, spiritual counselors, printer, or spectators and readers. And each has at least one role to play. No matter how powerful some institutions and individuals may appear, none has a monopoly over authority and how the events take shape on and beyond the scaffold. The centerpiece of the mid-seventeenth-century’s theatre of death was the condemned man’s last dying utterance. This study focuses on the words and contexts of many of those final speeches, including King Charles I’s (1649), Archbishop William Laud’s (1645), and the Earl of Strafford’s (1641), as well as those of less well known royalists and regicides. Where we situate ourselves to view, hear, and comprehend a public execution—through specific participants’ eyes, ears, and minds or accounts—shapes our interpretation of the ritual. It is impossible to achieve a singular, carefully indoctrinated meaning of an event as complex as a state-sponsored public execution.

Along with the variety of voices and meanings, the nature and purpose of the rituals of justice maintain a significant amount of consistency in a number of eras and cultural contexts. Whether the focus is on the trial and execution of the Marian martyrs, English royalists in the 1640s and 1650s, or the Restoration’s regicides, the events draw on a set of cultural expectations or conventions. Because rituals of justice are shaped by diverse voices and agendas, with the participants’ scripts and counterscripts converging and colliding, they are dramatic moments conveying profound meanings.

About the Author
Paul Klemp is professor of English at the University of Wisconsin, Oshkosh.

Reviews of 'The Theatre of Death: Rituals of Justice from the English Civil Wars to the Restoration'

“
The value of Klemp’s book lies in the way it painstakingly outlines the “collaborative” nature of public execution as a form of theater, with clearly de-ﬁned scripts and genres that played out self-consciously among victims and the crowd for nearly a century.
”
- Studies in English Literature
Library, Museums and Press
181 South College Avenue, Newark, DE 19717-5267