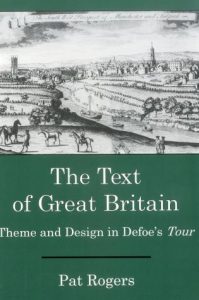 This book is the first full-length analysis of one of the key books of the eighteenth century—Daniel Defoe’s Tour Through the Whole Island of Great Britain. The creation of Defoe’s Tour, its sources and models, and its relationship to earlier topographic literature are discussed. The Text of Great Britain argues that Defoe evolved a rhetorical design that would express his sense of Britain as a working system constructed around cities, the countryside, and roads to form an intelligible whole.