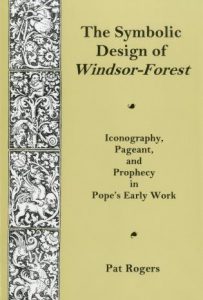 This is the first detailed exploration of one of the earliest major poems by Alexander Pope, Windsor Forest (1713). The book reveals how Pope used the artistic conventions of the Stuart court, such as masque, architecture, allegorical painting, and heraldry to create the last great Renaissance poem in English. A coherent symbolic design is constructed around the themes of the river and the forest. Pope organizes the structure and style of the poem to create a prophetic version of nationhood, drawing on such sources as the plays of Ben Jonson, the Whitehall paintings of Rubens, the architecture of Inigo Jones, the panegyric work of Dryden, and the topographical poetry of Drayton. The political dimensions of the poem are considered in relation to the foundation of the South Sea Company in 1711, with its foreshadowing of imperial issues to come. The book will spark further interest in a poem that has been gaining increasing attention recently from writers such as E. P. Thompson and Laura Brown. It shows the centrality of Pope in the debates of his time.

About the Author
Pat Rogers is DeBartolo Professor in the Liberal Arts at the University of South Florida.