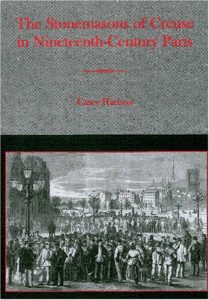 This book connects the story of a group of migrant workers to the question of why Paris became the nineteenth century’s “capital of revolution,” and why this stage of the city ended. The stonemasons were well known for their skills, and their seasonal migration from central France, but especially for their role in rebellions. They were set apart by a persistent reputation tying them to the city’s tumultuous history and to the revolutionary legacy of a physical location: the Place de Grève. Parisians and police saw the masons as part of the “dangerous classes,” while to bosses they were “docile.” This work draws upon research in archives and libraries, including the records of arrests, casualties, and compensation in rebellions, workers’ memoirs, police reports, and studies of marchandage —a hated form of subcontracting whose history paralleled that of the masons.

About the Author
Casey Harison is Associate Professor of History at the University of Southern Indiana.