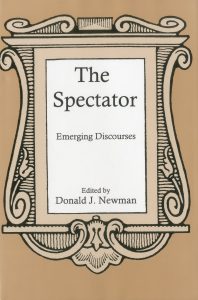 This book offers the latest scholarship on this influential series of essays. Taking advantage of the insights provided by such critical perspectives as new historicism, feminism, postcolonialism, psychology, postmodernism, and cultural studies, the scholars represented here take a fresh look at The Spectator and its relation to the changing culture that influenced it-and was influenced by it. A variety of cultural changes in the seventeenth century-political, social, and economic, to name a few of the major ones-destabilized the values and beliefs that organized and cemented the aristocratic/court hegemony of the late seventeenth century. Consequently, a multiplicity of discourses jockeyed for authority to redefine conventional aristocratic notions of morality, religion, politics, economics, class, gender, taste, art, and create new cultural identities and new categories of social status. The essays in this volume examine these discourses as they manifest themselves in The Spectator.

About the Editor
Donald J. Newman is an Associate Professor of English at The University of Texas-Pan American.