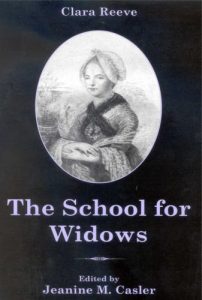 Clara Reeve’s 1791 epistolary novel The School For Widows tells the stories of childhood friends Frances Darnford and Rachel Strictland, both of whom have lived hard lives as the virtuous wives of improvident and immoral husbands. Frances, left penniless after the death of her gambler-spendthrift husband (who in an attempt to escape debtor’s prison tries to sell her to his friend), opens a school for girls, and eventually takes up with another tragic widow, Isabella di Soranzo, whom she rescues from a mental breakdown. Frances, Rachel, and Isabella not only survive their trials, but eventually become productive and beneficial members of society, thus serving as positive examples of the potential opportunity for widows in eighteenth-century England. The introduction to this new edition of Reeve’s novel challenges accepted critical views of Reeve’s writing and includes newly unearthed material about the author’s life.

About the Editor
Jeanine Casler teaches English courses at the University of Georgia.