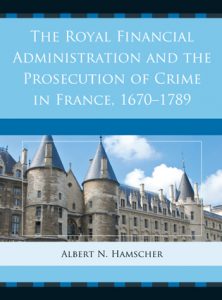 The Royal Financial Administration and the Prosecution of Crime in France, 1670–1789 explores the French monarchy’s role in financing criminal prosecutions in the royal courts of the realm—the payment of criminal frais de justice in the vocabulary of the ancien régime —between 1670 and 1789 (that is, from the codification of criminal judicial procedure in the early period of Louis XIV’s personal rule to the outbreak of the French Revolution). The subject brings together three areas of scholarly inquiry—criminal justice, royal administration, and the management of the crown’s finances. A central goal of the study is to provide factual information and interpretive insights on each of these topics and to explain the relationship of each to the others over a long time period. The book contributes to existing scholarship in four ways. First, although each of the major dimensions of the inquiry—the operation of the criminal justice system, the conduct of the royal administration, and the management of the monarchy’s finances—has a large and increasingly sophisticated historical literature, this is the first study to combine them in a systematic way. Second, the long time period covered in the book not only enables the historian to distinguish gradual from rapid change, but it also allows the reader to view how the system functioned in different historical contexts. Third, the study is based on archival sources throughout France. This comprehensive approach permits the identification of elements of a common experience without sacrificing attention to important aspects of regional diversity. Finally, with respect to the sources themselves, the range is broad, encompassing regulatory acts and decisions of the king’s councils; administrative correspondence at the central, regional, and in some cases local levels; financial accounts and related papers; and court records from the major appellate courts and from several lower courts as well. An appendix of 33 tables lists figures of annual expenditure and other pertinent financial operations for each of the major financial districts of the kingdom.