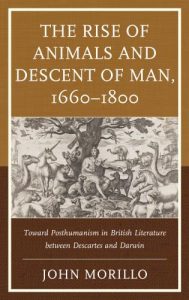 The Rise of Animals and the Descent of Man illuminates compelling historical connections between a current fascination with animal life and the promotion of the moral status of non-human animals as ethical subjects deserving our attention and respect, and a deep interest in the animal as agent in eighteenth-century literate culture. It explores how writers, including well-known poets, important authors who mixed art and science, and largely forgotten writers of sermons and children’s stories all offered innovative alternatives to conventional narratives about the meaning of animals in early modern Europe. They question Descartes’ claim that animals are essentially soulless machines incapable of thought or feelings. British writers from 1660-1800 remain informed by Cartesianism, but often counter it by recognizing that feelings are as important as reason when it comes to defining animal life and its relation to human life. This British line of thought deviates from Descartes by focusing on fine feeling as a register of moral life empowered by sensibility and sympathy, but this very stance is complicated by cultural fears that too much kindness to animals can entail too much kinship with them—fears made famous in the later reaction to Darwinian evolution. The Rise of Animals uncovers ideological tensions between sympathy for animals and a need to defend the special status of humans from the rapidly developing Darwinian perspective. The writers it examines engage in complex negotiations with sensibility and a wide range of philosophical and theological traditions. Their work anticipates posthumanist thought and the challenges it poses to traditional humanist values within the humanities and beyond. The Rise of Animals is a sophisticated intellectual history of the origins of our changing attitudes about animals that at the same time illuminates major currents of eighteenth-century British literary culture.

About the Author
John Morillo is associate professor of English at North Carolina State University.