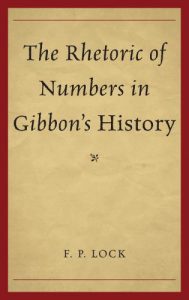 Gibbon aspired to combine the critical analysis of the eighteenth-century philosophe with the older traditions of the humanist and scholarly historian. His different uses of numbers, to inform and to persuade, illustrate his remarkable fusion of these characters. This book, the first to be devoted to a historian’s use of numbers, shows how carefully Gibbon interrogated and deployed the numerical evidence in his sources: to create a more accurate historical narrative; to demonstrate his own reliability and candor as a historian; and to convince readers of the validity of his interpretations of characters and events.

About the Author
F. P. Lock is professor of English at Queen’s University in Kingston, Canada.