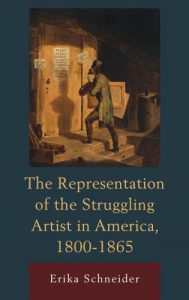 The Representation of the Struggling Artist in America, 1800–1865 analyzes how American painters, sculptors, and writers, active between 1800 and 1865, depicted their response to a democratic society that failed to adequately support them financially and intellectually. Without the traditional European forms of patronage from the church or the crown, American artists faced unsympathetic countrymen who were unaccustomed to playing the role of patron and less than generous in rewarding creativity. It was in this unrewarding landscape that American artists in the first half of the nineteenth century employed the “struggling” or “starving artist” image to satirize the country’s lack of patronage and immortalize their own struggles. Through an examination of artists’ journals, letters, and biographies as well as the development of art academies and exhibition venues, this study traces the evolution of a young nation that went from considering artists as mere craftsmen to recognizing them as important members of a civilized society.

About the Author
Erika Schneider is associate professor of art history at Framingham State University.