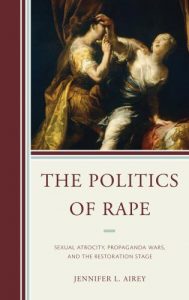 The Politics of Rape: Sexual Atrocity, Propaganda Wars, and the Restoration Stage is the first full-length study to examine representations of sexual violence on the Restoration stage. By reading theatrical depictions of sexual violence alongside political tracts, propaganda pamphlets, and circulating broadsides, this study argues that authors used dramatic representations of rape to respond to and engage with late-century upheavals in British political culture. Beginning with an examination of rape scenes in English Civil War propaganda, The Politics of Rape argues that Roundhead authors described acts of rape and atrocity to demonize their enemies, the Irish, the Catholics, and the Cavaliers. After the Restoration, propagandists and playwrights on each side of every political conflict would follow suit, altering the rhetoric of sexual violence in response to each new moment of political upheaval: The Restoration of Charles II, the Second and Third Anglo-Dutch Wars, the Popish Plot, the Exclusion Crisis, the Glorious Revolution, and the accession of William and Mary. The study offers an intensive look at British propaganda culture, gathering together a wealth of understudied pamphlet texts, and identifying a series of stock figures that recur throughout the century: The demonic Irishman, sexually violent villain of the 1641 Irish Rebellion tracts; the debauched Cavalier, the secretly Catholic royalist rapist; the poisonous Catholic bride, the malignant consort who encourages the rapes of Protestant women; the cannibal father, the evil patriarch who rapes his daughters-in-laws before ingesting his own sons as a symbol of monarchical overreach; and the ravished monarch, the male rape victim whose sexual violation protests his political disenfranchisement. The study also traces the appearance of these figures on the British stage, examining well-known works by Dryden, Rochester, Behn, Lee, and Shadwell, alongside lesser-known plays by Orrery, Howard, Settle, Crowne, Ravenscroft, Pix, Cibber, and Brady. The Politics of Rape thus offers a new method for understanding of the geo-political implications of theatrical sexual violence.

About the Author
Jennifer L. Airey is Assistant Professor of English at the University of Tulsa, where she specializes in Restoration and eighteenth-century British drama.