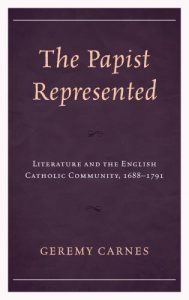 Most eighteenth-century literary scholarship associates the major developments in English literature and culture during the rise of modernity with a triumphant and increasingly tolerant Protestantism while assuming that the English Catholic community was culturally moribund and disengaged from Protestant society and culture. However, recent work by historians has shown that the English Catholic community was a dynamic and adaptive religious minority, its leaders among the aristocracy cosmopolitan, its intellectuals increasingly attracted to Enlightenment ideals of liberty and skepticism, and its membership growing among the middle and working classes. This community had an impact on the history of the English nation out of all proportion with its size—and yet its own history is glimpsed only dimly, if at all, in most modern accounts of the period.

The Papist Represented examines the intersections of literary, religious, and cultural history as they pertain to the slow acceptance by both Protestants and Catholics of the latter group’s permanent minority status. By focusing on the Catholic community’s perspectives and activities, it deepens and complicates our understanding of the cultural processes that contributed to the significant progress of the Catholic emancipation movement over the course of the century. At the same time, it reveals that this community’s anxieties and desires (and the anxieties and desires the community provoked in Protestants) fueled some of the most popular and experimental literary works of the century, in forms and modes including closet drama, elegy, the novel, and the Gothic. By returning the Catholic community to eighteenth-century literary history, The Papist Represented challenges the assumption that eighteenth-century literature was a fundamentally Protestant enterprise.

About the Author
Geremy Carnes is assistant professor of English at Lindenwood University.