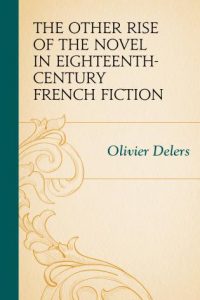 The rise of the novel paradigm—and the underlying homology between the rise of a bourgeois middle class and the coming of age of a new literary genre—continues to influence the way we analyze economic discourse in the eighteenth-century French novel. Characters are often seen as portraying bourgeois values, even when historiographical evidence points to the virtual absence of a self-conscious and coherent bourgeoisie in France in the early modern period. Likewise, the fact that the nobility was a dynamic and diverse group whose members had learned to think in individualistic and meritocratic terms as a result of courtly politics is often ignored. The Other Rise of the Novel calls for a radical revision of how realism, the language of self-interest and commercial exchanges, and idealized noble values interact in the early modern novel. It focuses on two novels from the seventeenth century, Furetière’s Roman bourgeois and Lafayette’s Princesse de Clèves and four novels from the eighteenth century, Prévost’s Manon Lescaut, Graffigny’s Lettres d’une Péruvienne, Rousseau’s La Nouvelle Héloïse and Sade’s Les infortunes de la vertu. It argues that eighteenth-century French fiction does not reflect material culture mimetically and that character action is best analyzed by focusing on the social and discursive exchanges staged by the text, rather than by trying to create parallels between specific behavior and actual historical changes. The novel produces its own reality by transforming characters and their stories into alternative social models, different articulations of how individuals should define their economic relations to others. The representation of interpersonal relations often highlights personal conceptions of private interest that cannot be easily reconciled with the traditional narrative of a transition towards economic modernity. Realism, then, is not only about verisimilar storytelling and psychological depth: it is an epistemological questioning about the type of access to reality that a particular genre can give its readers.

About the Author
Olivier Delers is associate professor of French at the University of Richmond.