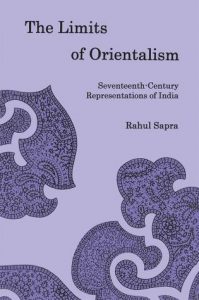 The Limits of Orientalism: Seventeenth-Century Representations of India challenges the recent postcolonial readings of European, predominantly English, representations of India in the seventeenth century. Following Edward Said’s discourse of “Orientalism,” most postcolonial analyses of the seventeenth-century representations of India argue that the natives are represented as barbaric or exotic “others,” imagining these representations as products of colonial ideology. Such approaches tend to offer a homogeneous idea of the “native” and usually equate it with the term “Indian.” Sapra, however, argues that instead of representing all natives as barbaric “others,” the English drew parallels, especially between themselves and the Mughal aristocracy, associating with them as partners in trade and potential allies in war. While the Muslims are from the outset largely portrayed as highly civilized and cultured, early European writers tended to be more conflicted with Hindus, their first highly negative views undergoing a transformation that brings into question any straightforward Orientalist reading of the texts and anticipates the complexity of later representations of the indigenous peoples of the sub-continent.

Sapra’s theoretical and methodological approach is influenced by such writers as Aijaz Ahmad and Denis Porter, who have highlighted powerful alternatives to Said’s discourse of “Orientalism.” Sapra historicizes European representations of the indigenous to draw attention to the contrasting approaches of the Portuguese, the Dutch and the English in relation to seventeenth-century India, effectively undermining comfortable notions of a homogenous “West.” Unlike the Portuguese, for whom the idea of a dynasty and the conversion of heathens went hand in hand with the idea of trade, for the Dutch and the English the primary consideration was commercial. In keeping with the commercial approach of the English East India Company, most English travelers, instead of representing the Muslims as barbaric “others,” highlight the compatibility between the two cultures and consistently praise the Mughal empire for its religious tolerance. In the representations of the Hindus, Sapra demonstrates that most writers, even while denigrating the Hindu religion, appreciate the civilized society of the Hindus. Moreover, in the representations of sati or widow-burning, a distinction needs to be made between the patriarchal and the Orientalist points of views, which are at variance with each other. The tension between the patriarchal and the Orientalist positions challenges Gayatri Chakravorty Spivak’s analysis of sati in “Can the Subaltern Speak?” which has become the standard model for most postcolonial appraisals of European representations of sati. The book highlights the lacuna in postcolonial readings by providing access to selections of commonly unavailable early-modern writings by Thomas Roe, Edward Terry, Henry Lord, Thomas Coryate, Alexander Hamilton and other the records of the East India Company, which makes the book vital for students of theory, European and South-Asian history, and Renaissance literatures.

About the Author
Dr. Rahul Sapra is associate professor in the Department of English at Ryerson University, Toronto.

Reviews of 'The Limits of Orientalism: Seventeenth-Century Representations of India'

“
[…] the author has succeeded in inspiring readers to confront authors who use simplistic notions and depend on a single discourse with a view to dissect the meanings of texts.
The book is an important addition to the understanding of Saidian Orientalism.
”
- Seventeenth-Century News
“
This book makes a useful contribution to the revisionist assault on Said’s Orientalism.
”
- Times Literary Review
Library, Museums and Press
181 South College Avenue, Newark, DE 19717-5267