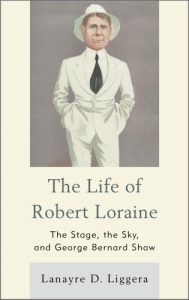 Robert Loraine was born in a niche of time when technology exploded into a world whose keyword was Progress. Both he and his life-long friend Bernard Shaw believed they were in an evolutionary period of humanity. Born into a theatrical family, he understood its clashes of temperament and competition for the attention of the audience. He was fortunate to be playing in London by age twenty-one, and securing lead roles two years later. Thus, it was incomprehensible to his peers when he volunteered to fight in the Boer War.

After his year of service, he heeded his father’s advice; first conquer London, and then America He accepted a contract from Daniel Frohman in New York. Four years of dusty old plots led him to yearn for something new, which he found in Shaw’s Man and Superman. A two year tour in the role of John Tanner led him to professional and financial success. This lust for something new led him beyond the perimeters of the stage into pioneer aviation. Visualizing the aeroplane’s unlimited potential, he challenged the theory that flight could only take place in calm weather by flying through a raging thunderstorm. Ever of a military mind, he also demonstrated the machine’s capacity for scouting at military maneuvers. With political storm clouds closing in again in 1914, Robert volunteered six days before his country declared war on Germany. Dispatched to the Royal Flying Corps, he served all four years of the war, rose to the highest rank of any civilian, and was gravely wounded twice. Robert married at age forty-five, but the compromises of domesticity did not come easily to him. His young wife, Winifred, suffered through the downward spiral of an aging actor. The thirties brought the great depression and he returned to the United States, attempting to make money on Broadway or in Hollywood. Finally able to return to England in November, 1935, he died two days before Christmas.

About the Author
Lanayre Liggera holds an M.A. in literature from Tufts University and another from Goddard-Cambridge Women’s Studies. She was a member of a feminist band, the New Harmony Sisterhood, which researched the women’s history, finding old songs, or writing new ones, using song as the most mnemonic device. Later, her childhood fascination with early aviation re-emerged, which led to a study of the Great War. In 1994 she was appointed chairman of the New England-New York Chapter of the Western Front-U.S. Branch, serving for fourteen years, arranging conferences in different locations each year, including London.