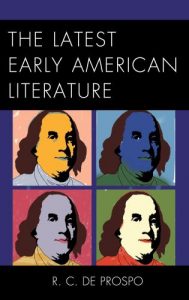 The Latest Early American Literature, according to readers for the University of Delaware Press, is “a collection of polemics and manifestoes.” In it R. C. De Prospo bids to follow in the footsteps of the two, rare, early Americanist dissenters whom Philip F. Gura once distinguished as “prophets without honor in the field”: William Spengemann and Michael Colacurcio. The book contends that a supposedly retired nationalist/modernist “telos” continues to reign in most of the latest scholarship, and even more influentially in all of the current literary histories and anthologies, no matter how expansive in gender, ethnic, racial, and “hemispheric” inclusiveness they profess to be. Old teloi, in particular that old American exceptionalist one, can be cunning.

Updating and expanding upon essays written over the past thirty years, De Prospo proposes not only negatively to critique how the latest scholarly receptions of early American literature differ insignificantly from the earlier ones, but positively to propose how a transnationalist concession—that as a neocolonial culture America’s lags behind that of Europe—might advance post-modern historiography by radically repositioning the past as no longer the present’s diachronic predecessor but, to quote Lyotard’s semiotics, its synchronic “differend.” Closer to earth, De Prospo tries at the same time to remain mindful of the pedagogical imperative that ultimately to save the texts of early American literature will require making them legible to average non-specialist, never-to-become specialist undergraduate general education students. To facilitate this he introduces in the concluding section of The Latest Early American Literature what will probably be taken as its most radical intervention: the redefinition of Edgar Allan Poe as an early American writer.

About the Author
R.C. De Prospo is professor of English at Washington College of Maryland.