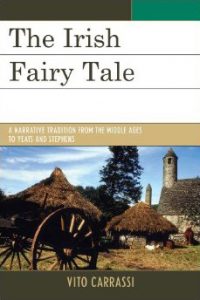 Beginning with a critical reappraisal of the notion of “fairy tale” and extending it to include categories and genres which are in common usage in folklore and in literary studies, this book throws light on the general processes involved in storytelling. It illuminates the fundamental ways in which a culture is formed, while highlighting important features of the Irish narrative tradition, in all its wealth and variety and in its connections with the mythical and historical events of Ireland. The Irish Fairy Tale argues that the fairy tale is a kind of “neutral zone,” a place of transition as well as a meeting place for popular beliefs and individual creativity, oral tradition and literary works, historical sources and imaginary reconstructions, and for contrasting and converging views of the world, which altogether allow for a deeper and more sophisticated understanding of reality. The book focuses on stories by Yeats and Stephens, whose approach to the subject marks the culmination of a long tradition of attempts at linking past and present and of bridging the gap between what appear to be contradictory facets of a single culture. This leads to a comparative study of Joyce’s Dubliners, which illustrates the universal and exemplary nature of the notion of fairy tale put forward in the work.

About the Author
Vito Carrassi is a writer and translator who teaches folklore at the University of Bari. His main fields of research are literary anthropology, narratology, Irish and Italian folklore.