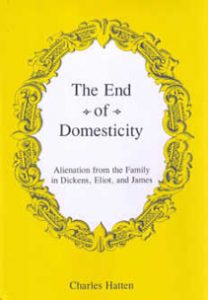 Few changes in literary history are as dramatic as the replacement of the sentimental image of the home in Victorian fiction by the emphasis in modernist fiction on dysfunctional families and domestic alienation. In The End of Domesticity Charles Hatten offers a provocative theory for this seminal shift that even now shapes literary depictions of the family. Discussing works by Charles Dickens, George Eliot, and Henry James, Hatten shows how these major writers anticipate modernist preoccupations with domestic alienation while responding to their own historical context of changes in, and controversies about, gender roles and the family. Most originally, Hatten argues that these writers’ representations of gender and domesticity are strongly influenced by anxieties about capitalism and the marketplace as well as the changing nature of gender roles in late Victorian England. Charles Hatten is Associate Professor of English at Bellarmine University in Louisville.