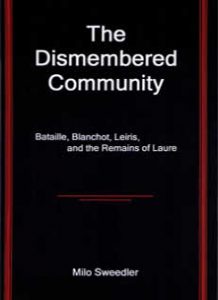 This book examines the intersecting communitarian endeavors of Georges Bataille, Maurice Blanchot, Michel Leiris, and Colette Peignot, known posthumously as Laure. Through detailed analysis of a series of interlocking texts that the four authors write on, for, and to one another on such topics as love, friendship, and fraternity, it explores these authors’ theoretical elaborations of community, their actual communities, and the relation between the two. At the center of this investigation stands the controversial figure of Laure, who functions both during her life and after her premature death as a catalyst for the communities formed around her by a group of men. Not only the first book-length study of the intersecting relationships and theoretical musings of four writers who contested the boundaries between reflection and affection, this book is also the first extended critical investigation in any language of the legacy of one of the most provocative and elusive figures of the twentieth-century French avant-garde.

About the Author
Milo Sweedler is an associate professor of French, cultural analysis, and social theory at Wilfrid Laurier University.