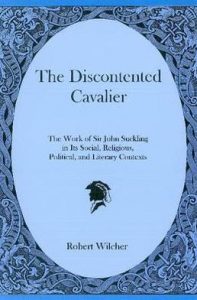 This comprehensive study of the literary output of Sir John Suckling reconstructs the various contexts in which the poems, plays, letters, and prose tracts were produced and, by means of close textual analysis, reveals the nature of one writer’s engagement—both creative and subversive—with the social, religious, political, and cultural dimensions of Caroline England. It challenges the common view of Suckling as primarily a court wit and courtier playwright and makes a case for reading much of his poetry and drama as a critique of the social values and aesthetic fashions associated with the patronage of Queen Henrietta Maria. In other words, this so-called “Cavalier” is revealed as an astute and skeptical commentator on national and international affairs, whose discontent with the religious and political consequences of King Charles I’s government during the 1630s was often at odds with his unshakable loyalty to the crown.

About the Author
Robert Wilcher recently retired as Reader in Early Modern Studies at the University of Birmingham.