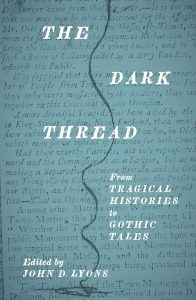 In The Dark Thread, scholars examine a set of important and perennial narrative motifs centered on violence within the family as they have appeared in French, English, Spanish, and American literatures. Over fourteen essays, contributors highlight the connections between works from early modernity and subsequent texts from the eighteenth through the twentieth centuries, in which incidents such as murder, cannibalism, poisoning, the burial of the living, the failed burial of the dead, and subsequent apparitions of ghosts that haunt the household unite “high” and “low” cultural traditions. This book questions the traditional separation between the highly honored genre of tragedy and the less respected and generally less well-known genres of histoires tragiques, gothic tales and novels, and horror stories.

Reviews of 'The Dark Thread: From Tragical Histories to Gothic Tales'

“
This collection of essays argues that we see the Gothic as a ‘dark thread’ that extends the early modernity of the sixteenth and seventeenth centuries to the heyday of modernity in the nineteenth. This is an innovative and well-conceived contribution to literary and cultural studies that will interest a wide range of readers.
”
- Lewis Siefert, Brown University, author of Manning the Margins: Masculinity and Writing in Seventeenth-Century France
Library, Museums and Press
181 South College Avenue, Newark, DE 19717-5267