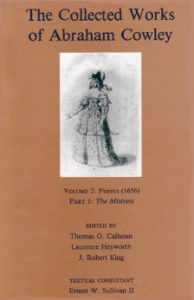 This new edition includes a full bibliographical and critical account of The Mistress. The authority of early printed editions is tested against many other versions of the poems appearing in manuscript copies, printed miscellanies, and as song texts.