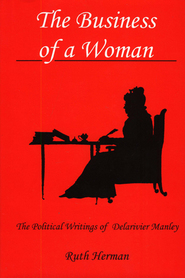 The Business of a Woman is the first full-length study of Delarivier Manley, the increasingly important early modern scandal writer, journalist, and propagandist whose most famous work is The New Atalantis (1709). The book focuses on her importance in the fields of political journalism and propaganda, and considers Manley’s writing in terms of her importance to the Tory/Whig party conflict and other contemporary writers and pamphleteers. There is a detailed analysis of Manley’s literary relationships with key figures such as Jonathan Swift and Richard Steele, and a full consideration of her political networks, including her working relationship with the Oxford ministry of 1710-1714.

About the Author
Ruth Herman teaches Public Relations and Marketing at the University of Herfordshire Business School.